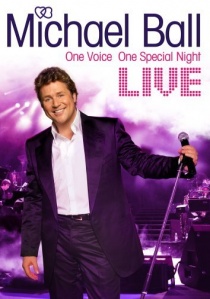 The king of musical theatre, Michael Ball, presents One Voice, One Special Night a brand new live DVD courtesy of Universal Pictures on the 19th November 2007. Take home the magic of music from the man who has sold millions of albums worldwide and will soon be appearing in a lead role in the new West End musical, Hairspray. Be entertained as Michael Ball sings an outstanding collection of beautiful songs by some of the world's leading songwriters such as Barry Manilow, Diane Warren and Michael Bublé.

Michael has starred on Broadway and dominated the marquees on many of the leading West End shows for more than two decades. A proven and varied talent, Michael won acclaim and the hearts of the public with his numerous performances on stage, film and television. All Michael's twelve solo albums have held commanding positions in the UK charts, all rapidly going gold within weeks of their release. In July 1999 Michael was presented with the Theatregoers Club of Great Britain's award for Most Popular Musical Actor over the last 21 years, Michael was also recently a very popular judge on ITV's Soapstar Superstar.

One Voice, One Special Night Live was filmed live at the Hammersmith Apollo during his outstanding 2007 national sell-out tour and features some of Michael's favourite songs of all time. From Barry Manilow's haunting One Voice to the sixties soul of Amy Winehouse's Rehab', One Voice, One Special Night Live is packed with timeless to modern songs. Performances also include Since You've Been Gone, the Rainbow classic, I Don't Feel Like Dancin by Elton John and Queen's Don't Stop.

UHD
Based on the global blockbuster videogame franchise from Sega, Sonic The Hedgehog, released on DVD, Blu-ray and 4K UHD from 8th June 2020 from Paramount Home Entertainment, tells the story of the ... END_OF_DOCUMENT_TOKEN_TO_BE_REPLACED
Top PicksView