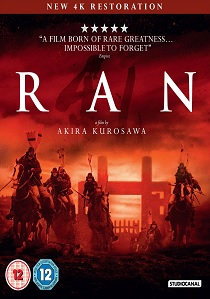 NewsDramaWorld Cinema
News Article Go back to homepage
One of the most important and influential film makers in cinematic history, Akira Kursawa's final masterpiece, Ran has been beautifully restored in 4k and will be released on DVD and Blu-ray on 2nd May 2016 courtesy of StudioCanal.
Tatsuya Nakadai, Akira Terao, Jinpachi Nezu, Daisuke Ryu, Mieko Harada
Akira Kurosawa
Masato Hara, Serge Silberman
StudioCanal
2 hours 35 minutes
02/05/2016
#Ran
Thank you for supporting DVD365.net when you order using the link(s) below. As an Amazon Associate we earn from qualifying purchases
Buy DVD
Buy BD
Information

One of the most important and influential film makers in cinematic history, Akira Kursawa directed 30 films in a career spanning 57 years. His final masterpiece, Ran has been beautifully restored in 4k for the first time and will be released on DVD and Blu-ray on 2nd May 2016 courtesy of StudioCanal.

When Saburo voices concerns about the wisdom of his father's plan, claiming that treachery within the family will be inevitable, Hidetora mistakes these comments for a threat and when his servant Tango comes to Saburo's defense, he banishes both of them. This allows Taro and Jiro to take charge, unopposed, leading to a brutal and bloody struggle for the absolute power of the warlord.