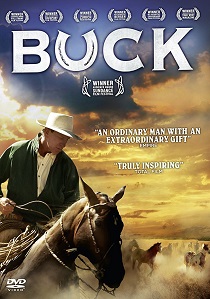 Released by Revolver Entertainment to DVD and download on 7th May 2012 - and including commentary, deleted scenes and photogallery - multi award-winning documentary Buck charts the remarkable story of Buck Brannaman, the real life "Horse Whisperer".

Buck is a cowboy, teacher and philosopher. Travelling across the United States and further afield all over the world, Buck spends his time sharing his seemingly miraculous gift, helping people and horses alike. He has gained worldwide fame and respect for his skill in natural horsemanship and his remarkable way with these beautiful beasts.

Brannaman's story, from his torturous upbringing by an abusive father; to being taken into care by a foster family; and then becoming the subject of a best selling novel and a Hollywood movie, is captured in Buck.

Buck's unique philosophy of absolute compassion with horses he trains is a result of the lessons he learnt from a violent father and a loving foster family - that trust and empathy go far further than cruelty and intimidation. Brannaman has an astounding ability to transform horses - and people - through teaching respect and patience.

The remarkable strength of character shown by Buck in the face of such adversity - confronting and accepting his dark past - and the strength and wisdom he has derived from his journey, has also made him a loving father.

Nevertheless for the majority of the year, year after year, Buck leaves his family at home and tirelessly travels from clinic to clinic to deliver his wisdom to those in need. He deals with unruly horses and fractious humans alike, treating his charges with grace, generosity and the lightest of touches. As Buck says, "Often instead of helping people with horse problems, I'm helping horses with people problems".

HotDVDBDTV
DCI Tom Brannick returns, as the murder of a crooked accountant unravels a trail of greed that threatens to expose the true identity of the legendary assassin, codenamed, Goliath in Bloodlands: Series 2 released on DVD and Blu-ray 14th November 2022 from Dazzler Media. END_OF_DOCUMENT_TOKEN_TO_BE_REPLACED
Top PicksView