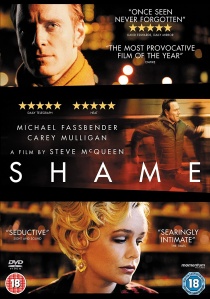 Lose yourself in one of the most critically acclaimed and wildly talked about films of the year, as Steve McQueen's breath-takingly seductive drama; Shame comes to Blu-ray and DVD on 14th May 2012 from Momentum Pictures.

Recipient of both industry and audience recognition, Shame boasts a formidable cast, including 2011's London Critics Film Circle Award Winner: British Actor of the Year - Michael Fassbender (A Dangerous Method, Prometheus), BAFTA® award-winner Carey Mulligan (An Education, Drive, Never Let Me Go) and James Badge Dale (The Departed, The Grey). Shame is blessed with powerful and visceral performances that will draw you even deeper into this dark drama and the complicated dynamics of human connection.

Directed by Steve McQueen (Hunger) and with a screenplay provided by Abi Morgan; writer of biopic blockbuster The Iron Lady and the producers behind The King's Speech and Control; Shame's dream team cast and crew has rendered the picture a cinematic triumph not to be missed. With both Golden Globe® nomination for Best Actor (Fassbender) and a BAFTA® nomination for Outstanding British Film and Best Actor in a Leading Role (Fassbender) this year, it seems Shame's success knows no bounds.

'Brandon' (Fassbender) is a thirty-something man living comfortably in New York balancing a busy job and an active social life. When the wayward Sissy (Mulligan), turns up at his apartment unannounced, Brandon's carefully managed lifestyle spirals out of control.

From award-winning director Steve McQueen (Hunger), Shame is a compelling and timely examination of the nature of need, how we live our lives and the experiences that shape us. Take control of your life and make a connection with the magnificent tour de force that is Shame on Blu-ray and DVD on 14th May 2012 from Momentum Pictures.

HotUHD
Now more stunning than ever before, return to the stunning locations and epic adventures in Peter Jackson's Middle-earth in The Lord of the Rings Trilogy, arriving on stunning 4K UHD 30th November 2020 from Warner Home Video. END_OF_DOCUMENT_TOKEN_TO_BE_REPLACED
Top PicksView