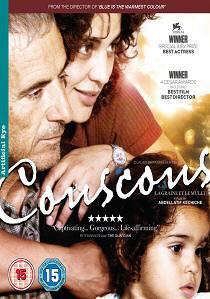 From the director of Blue is the Warmest Colour, Couscous, released on DVD and Blu-ray on 17th March 2014 courtesy of Artificial Eye, is a French ensemble piece focussing on the lives of an immigrant community in the south of France.

This internationally acclaimed, warm and entertaining family drama tells the story of Slimane, a sixty-something North African immigrant who has just been laid off after a lifetime's toil at a shipyard in the French Mediterranean port of Sète.

Against considerable odds, Slimane determines to realise his long-held dream of opening a couscous restaurant, but to do so must rally the support of his extended family including his ex-wife, children, mistress and her hot-headed daughter. Eventually the make-or-break opening night arrives and the scene is set for a dramatic and nail-bitingly tense finalé.

Featuring some of the most mouthwatering scenes of food and feasting ever committed to celluloid, this superbly performed, intimate and vividly realised film is an engrossing tale of hope, cultural identity and familial rivalries.

HotUHD
Say the 'B' word three times and have a wonderful Day-O as Tim Burton's Beetlejuice arrives for the first time on 4K UHD 31st August 2020 from Warner Home Video. END_OF_DOCUMENT_TOKEN_TO_BE_REPLACED
Top PicksView