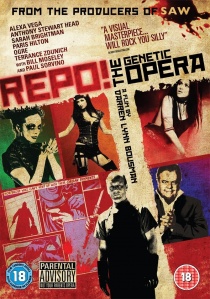 In the year 2056 - the not so distant future - an epidemic of organ failures devastates the planet. Out of the tragedy, a saviour emerges: GeneCo, a biotech company that offers organ transplants - for a price. Those who miss their payments are scheduled for repossession and hunted by villainous Repo Men (Anthony Stewart Head).

In a world where surgery addicts are hooked on painkilling drugs and murder is sanctioned by law, a sheltered young girl (Alexa Vega) searches for the cure to her own rare disease as well as information about her family's mysterious history. After being sucked into the haunting world of GeneCo, she is unable to turn back, as all of her questions will be answered at the wildly anticipated spectacular event: The Genetic Opera.

Related Articles
Batman: Gotham By Gaslight, Girlfriends, A Street Cat Named Bob, Racing Hearts, Buffy the Vampire Slayer
The Texas Chainsaw Massacre 2, The Texas Chainsaw Massacre 2, Exit Humanity, The Graves, Dead Set, Boar, 3 From Hell, Prisoners of the Ghostland
Dirty Money, The Stuff, Cruising, Money Talks, Rocketeer, Cruising
Devil In The Woods, Fear Itself: Series 1, 666: The Prophecy, Mother's Day, Saw III: Extreme Edition, Death of Me, Spiral: From The Book Of Saw
The Hottie and the Nottie, Pledge This!
The Remaining, Bad Blood, From Prada To Nada, Spy Kids 4
For your consideration 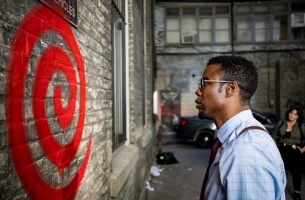 Spiral: From The Book Of Saw

BD
Experience the thriller influenced by the astounding real-life story of the Gucci family and their unexpected legacy in House Of Gucci, available on Blu-ray and DVD 21st February 2022 from Universal Pictures (UK). END_OF_DOCUMENT_TOKEN_TO_BE_REPLACED
Top PicksView