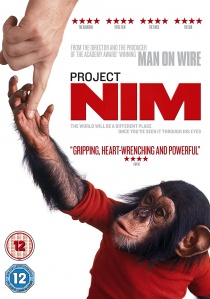 From the Oscar® and BAFTA® winning filmmakers behind Man On Wire, James Marsh and Simon Chinn, comes the story of Nim the chimpanzee. In the 1970's Nim became the focus of a controversial and groundbreaking experiment, which aimed to show that an ape could learn to communicate with language if raised and nurtured like a human child.

Catch a unique look at one of the most shocking and most interesting social experiments to date with a selection of DVD extras, including an audio commentary from James Marsh plus the Making of Project Nim and Bob's Journey featurettes and a stunning photo gallery.

The film follows Nim's fascinating existence in a human society and the enduring impact he made on people along the way. Project Nim is an unflinching and powerfully devastating biography of an animal we tried to make human; a journey of power, attraction and group bonding in a species whose startling capacity for selfishness and aggression is offset by human displays of affection and intelligence.

What we learn from Nim is his true nature - and indeed our own - is comic, revealing and profoundly unsettling.

Related Articles
The Mercy, The Theory Of Everything, Shadow Dancer, King of Thieves
For your consideration

HotDVDBD
King Of Thieves, released 21st January 2019 on DVD and Blu-ray from StudioCanal, is the incredible true story of the spectacular Hatton Garden diamond heist, the biggest and most daring in British history. END_OF_DOCUMENT_TOKEN_TO_BE_REPLACED
Comments
Hot Pick

HotDVDBDDIGITAL
With stunning revelations, glamorous journeys, and the arrival of the Jazz Age, Downton Abbey: A New Era, released on DVD and Blu-ray 15th August 2022 from Warner Home Video, will be the Crawleys' biggest adventure yet as they grapple with their future and new intrigue about ... END_OF_DOCUMENT_TOKEN_TO_BE_REPLACED
Top PicksView