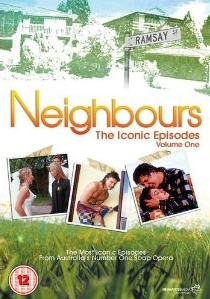 Shock Entertainment and FremantleMedia are extremely proud to announce the UK DVD release of Neighbours: The Iconic Episodes Volume 1, on 10th November 2008. This set of 23 episodes is available on DVD for the very first time in the UK, and includes the 1000th episode party celebration special.

Neighbours: The Iconic Episodes Volume 1 is a trip down memory lane for fans of one of Australia's most successful TV dramas. This DVD collection features complete episodes from some of the most memorable moments in the 22 years of Ramsey Street history. It includes classic storylines that launched the successful international careers of Kylie Minogue, Jason Donovan, Guy Pearce, Natalie Imbruglia and Holly Valance.

This 3 DVD box set highlights vintage episodes including the very first episode to be broadcast, the shooting of Kerry Mangel, the explosion at the Waterhole, Dee & Toady's nightmare honeymoon and, of course, when Henry got caught naked!!

Neighbours: The Iconic Episodes Volume 1 is the perfect way to rediscover all those characters that Britain fell in love with!