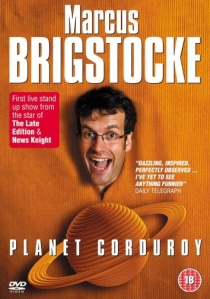 Following a totally sold out run with a live version of his TV show The Late Edition at the Edinburgh Festival this year, Marcus Brigstocke, the award winning stand up comedian from We Are History, News Knight and Have I Got News For You and BBC Radio 4's The Now Show, releases his first DVD Planet Corduroy on 19th November 2007 from SonyBMG.

Directed by Geoff Posner (Little Britain), Planet Corduroy will be recorded at the Shaw Theatre, London on the 18th and 19th September. Marcus is currently touring with his new show, Your Time is Up. Marcus is the king of satirical comedy. There's not much that hasn't come under his comedic gaze with blisteringly funny results - Climate Change, Religious Extremism, Immigration, Loans Companies, The Special Relationship, Compensation Culture, Women's Magazines, The EU and David Blaine, not to mention his own personal battle against his middle class roots.

As well as for the last three years hosting The Late Edition on BBC 4, Marcus's TV appearances are numerous. He was in BBC 2's Excuse My French learning French (alongside Esther Rantzen and Ron Atkinson) and then performing stand up in French to a discerning Parisian crowd. After several years as the 'angry young man' on the BBC Radio 4's The Now Show, Marcus is regularly heard in the 6.30pm slot on Radio 4. He has written and recorded three series and four specials of Giles Wemmbley-Hogg Goes Off (GWH was also seen on TV at Glastonbury earlier this year in a special programme for BBC4).

Marcus has written and performed three series of The Museum Of Everything, and appears on Just a Minute, Newsquiz, and The Today Program. As well as touring and filming The Late Edition - Marcus will be going on a trip to the Arctic with Cape Farewell, which brings artists, scientists and educators together to address and raise awareness about climate change. No Camaron-esque empty gesture this, he will be attempting to sail the 78th parallel between Northern Greenland and the melting Arctic Ice Sheet, which has opened for the first time this year due to global warming. Each day he will be writing a newspaper column from the boat and filming a documentary of the trip, which also includes climate scientists, oceanographers, and various artists and writers including Vikram Seth.

Marcus lives in South London, happily married to his university sweetheart, and is a proud father of two. He is committed to non-violence and is an active campaigner for CND and 'Campaign Against Arms Trade'. He once accidentally had a #11 chart hit. It is worth saying that Marcus also worked (very briefly) as a podium dancer, and also on an oil rig in the North Sea (although not as a dancer). He is fanatical about snowboarding - so much so he will be artistic director of the 2008 Altitude Festival in Mirabel - and adores music and movies.

3D-BD
The surviving members of the resistance face the First Order once again, and the legendary conflict between the Jedi and the Sith reaches its peak as Star Wars: The Rise of Skywalker is released on ... END_OF_DOCUMENT_TOKEN_TO_BE_REPLACED
Top PicksView