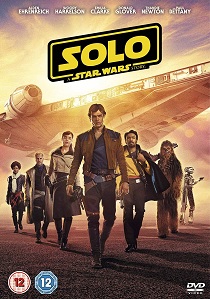 Lucasfilm's Solo: A Star Wars Story, directed by Academy Award®-winning filmmaker Ron Howard-the creator of unforgettable films, such as A Beautiful Mind, Apollo 13, Parenthood and Splash took moviegoers on this summer's wildest ride with the most beloved scoundrel in the galaxy, Han Solo (Alden Ehrenreich).

Solo: A Star Wars Story bonus content takes fans behind the scenes to experience compelling discussions with the star-studded cast and screenwriters Jonathan Kasdan & Lawrence Kasdan (writer of Star Wars: The Empire Strikes Back and Star Wars: Return of the Jedi); a revealing feature on Chewie and his enduring friendship with Han; a close-up look at the original version of the Millennium Falcon and Han's first time piloting the infamous ship; the creation of the film's otherworldly settings and pulse-pounding action sequences; and eight never-before-seen deleted and extended scenes.

The legendary John Williams is credited with the Han Solo Theme and original Star Wars music.

DVD
Arriving on DVD and Blu-ray 17th May 2021 from Acorn Media (UK), the hit police corruption drama from the makers of Bodyguard returns as Series Six of Line of Duty sees AC-12 facing their most ... END_OF_DOCUMENT_TOKEN_TO_BE_REPLACED
Hot PicksView