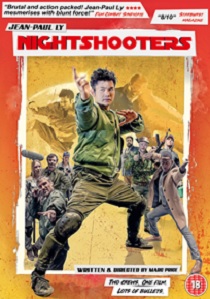 NewsActionThrillerCrimeAdventure
News Article Go back to homepage
A film crew led by stuntman Donnie come to witness a Gangland hit, and have to fight for their lives to survive the night in Nightshooters, available on digital download and DVD from 28th January 2019 from Ascendant Releasing.
Jean-Paul Ly, Doug Allen, Nicolas Aaron, Rosanna Hoult, Wendy Glenn, Philip Barantini
Marc Price
Michelle Parkyn
Ascendant Releasing
1 hour 30 minutes
28/01/2019
#Nightshooters
Thank you for supporting DVD365.net when you order using the link(s) below. As an Amazon Associate we earn from qualifying purchases
Buy DVD
Buy BD
Information

Nightshooters is a non-stop action-thriller about a group of filmmakers who find themselves on the run from a violent mob of criminals, after witnessing a brutal gangland execution. Unable to escape their set, the hapless film crew must use their technical skill and cinematic knowledge to survive.

As the hoods draw near to eradicate all witnesses, stunt man Donnie (Jean-Paul Ly) is forced to take his martial arts capabilities off script, putting his skills to practice for survival. The sound team resourcefully use their equipment to track their surroundings as the special effects guru disregards all the rules of set, abandoning safety to set lethal traps as the cat and mouse game of survival ensues!

This film is a fusion of The Raid mixed with Blow-Up (or Blow Out if you're a DePalma fan) and the popular British Gangster genre with lots of humour and characters you'll love, hate and admire all at the same time.