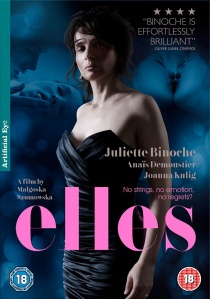 Uncovering the secrets of the world's oldest profession, Artificial Eye announces the compelling and bold Elles for release on DVD, Blu-Ray and Digital Download on 20th August 2012.

Starring Academy Award winner© Juliette Binoche (Chocolat, The English Patien), Anais Demoustier (Grown Ups, Living Off Love Alone) and Joanna Kulig (The Woman In the Fifth). Elles, is a heart wrenching insight into the distressing and hidden issues of prostitution.

Anne (Binoche), a well-off, Paris-based mother of two and investigative journalist for Elle magazine, is writing an article about student prostitution. Her meetings with two fiercely independent young women, Alicja (Kulig) and Charlotte (Demoustier), are profound and unsettling, moving her to question her most intimate convictions about money, family and sex. Elles portrays the deeply felt moment-to-moment experiences of a woman...played with astonishing sensitivity and commitment by Binoche. This sharp honest take on female friendship and sexuality sees Binoche give one of her rawest performances.

Elles is directed by Malgoska Szumowska, her credits as director include the internationally acclaimed feature films Happy Man (2000), Stranger (2004) and 33 Scenes from Life (2008, Silver Leopard winner at Locarno), as well as a number of short documentaries and a contribution to the omnibus film Visions of Europe (2008).

BD
Finding praise from critics around the world, Boyhood, following the life of Mason, from early childhood to his arrival at college, is released on Blu-ray and 4K UHD 27th March 2023 from Arrow Films. END_OF_DOCUMENT_TOKEN_TO_BE_REPLACED
Top PicksView