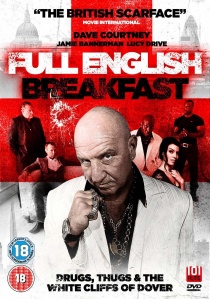 Dave Courtney gives an unforgettable performance as Dave Bishop, one of the most murderous gangsters ever depicted on film, in the bloody crime epic Full English Breakfast, released on DVD on 7th April 2014, courtesy of 101 Films.

Through flashbacks, Full English Breakfast follows the violent career of a small-time London villain who kills his way to the top of Britain's drugs empire

Now happily 'retired' on the Kent coast Dave becomes embroiled in a bloody battle of wits with Al Qaeda terrorists who want to take over his criminal empire. Adding to the old mobster's woes is his younger trophy wife (Lucy Drive) wanting to play away with his new driver (Jamie Bannerman).

With its intense screenplay, stunning cinematography, and superb insights into Britain's gangster lifestyles, Full English Breakfast joins the ranks of the UK's greatest underworld dramas, as it lays bare the sordid power of the British ecstasy scene.