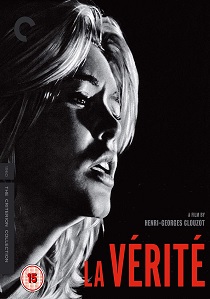 Beautiful, troubled Dominique Marceau (Brigitte Bardot) came to bohemian Paris to escape the suffocation of provincial life, only to wind up in a courtroom, accused of a terrible crime: the murder of her lover (Band of Outsiders' Sami Frey).

As the trial commences and the lawyers begin tangling over Dominique's fate, the Oscar-nominated La vérité, directed by Henri-Georges Clouzot (Diabolique), delves into her past, reconstructing her struggle to find a foothold in the city. What emerges is a nuanced portrait of an impulsive young woman misunderstood and mistreated by those around her, and of her ultimately tragic affair with an up-and-coming conductor.

With an astonishing performance by Bardot, Clouzot's affecting and intricately constructed film-a huge late-career success for the French master-renders a harsh verdict against a hypocritical and moralistic society.

La Vérité is given the Criterion treatment on Blu-ray 25th February 2019 from Sony Pictures Home Entertainment.

BD
After more than thirty years of service as one of the Navy's top aviators, Pete 'Maverick' Mitchell is back where he belongs as Top Gun: Maverick flies onto DVD, Blu-ray and 4K UHD 31st October 2022 from Paramount Home ... END_OF_DOCUMENT_TOKEN_TO_BE_REPLACED
Top PicksView