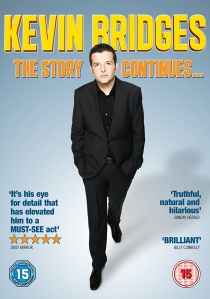 NewsStandup Comedy
News Article Go back to homepage
Released by Universal Pictures (UK) on 12th November 2012 on DVD and Blu-Ray, Kevin Bridges The Story Continues... sees Kevin triumphantly return to the stage in his home city and perform at the SECC Arena in Glasgow.
Kevin Bridges
Tom Poole
Anthony Caveney
Universal Pictures (UK)
Unknown
12/11/2012
Thank you for supporting DVD365.net when you order using the link(s) below. As an Amazon Associate we earn from qualifying purchases
Buy DVD
Buy BD
Information

Scotland's finest young comedian, Kevin Bridges follows his best-selling debut DVD The Story So Far... Live In Glasgow with the release of his second stand-up DVD this autumn. Released by Universal Pictures (UK) on 12th November 2012 on DVD and Blu-Ray, Kevin Bridges The Story Continues... sees Kevin triumphantly return to the stage in his home city and perform his brand new show to over 10,000 fans at the SECC Arena in Glasgow.

Filmed during his massive 87 date UK & Ireland 2012 autumn tour, which includes an unprecedented 10 sold-out nights at Glasgow's SECC Arena, The Story Continues.... is 25 year old Bridges' highly anticipated return to the spotlight and is set to be even funnier than his best-selling 2010 debut DVD release. 2012 is the year for all comedy fans across the UK to finally catch this comedy genius at the top of his game.

Often cited as the most exciting Scottish comedian since Billy Connolly (Billy himself recently singled him out as a "brilliant" stand-up), Kevin has the precious ability to tell stories everyone can to relate to, all delivered in his uniquely distinctive and unforgettable way. His thoughtful brand of social commentary, astute observations and sharp one-liners have proved a big hit with audiences with his current tour selling out instantly throughout the British Isles - from Inverness in the north to Portsmouth in the south.

This year not only saw Kevin return to touring his stand up shows, his successful and well received six part BBC1 series 'Kevin Bridges What's The Story' aired in February with consistently high viewing figures, both for the original broadcast plus it's BBC1 repeats.

His debut DVD release Kevin Bridges What's The Story... Live In Glasgow was the surprise stand-up DVD hit of the year, having out-sold more established comedians within the first few weeks on sale and earning him the number 2 debut comedy DVD that year. The DVD has now sold over 350,000 copies to date. Also in 2010 he sold out over 85 tour dates on his first ever UK solo tour plus he hosted an episode of Live At The Apollo (BBC1) and headlined an episode of Michael McIntyre's Comedy Roadshow (BBC1). In 2011 Kevin also hosted the second series of Channel 4's late night topical comedy show, Stand Up For The Week.

Kevin has become a consistent regular on our television screens, with credits including: Live At The Apollo (BBC1), Michael McIntyre's Comedy Roadshow (BBC1), Have I Got News For You (BBC2), 8 Out Of 10 Cats (Channel 4), Mock the Week (BBC2), Would I Lie To You (BBC1), Channel 4's Comedy Gala At The 02 (2010 & 2011 & 2012), Rab C Nesbitt (BBC2), Grouchy Young Men (Comedy Central), The Comedy Store (Comedy Central) and The World Stands Up (Comedy Central). His radio work includes Fighting Talk (BBC Radio 5 Live), 4 at the Fringe (BBC Radio 4), Serious About Comedy (BBC Radio 7), The Fred Macaulay Show and Off The Ball (both BBC Radio Scotland).