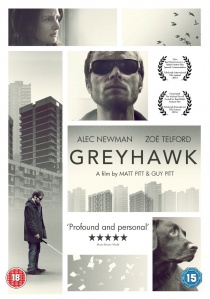 Imagine you are blind. Imagine you are utterly dependent on an animal - your guide dog - to make sense of the world around you. Then imagine your guide dog disappears. Greyhawk is the powerful debut feature from director Guy Pitt, and writer Matt Pitt, that explores the life of a blind veteran on a tough estate in London and comes to VOD on 13th April 2015 and DVD on 25th May 2015 courtesy of Metrodome Distribution.

Nominated for the Michael Powell Best British Feature Film award at Edinburgh International Film Festival 2014, Greyhawk is a gripping story about Mal Walker, played in a standout turn by Scottish actor Alec Newman (A Lonely Place to Die, Bright Young Things), an army veteran, blinded in Afghanistan and living by the Greyhawk Estate until he has the money to escape. Cocky, caustic and resentful, but not without engaging wit, his only real companion is Quince, his Labrador guide dog.

Mal is a few days away from starting a new life in the country with the money he has been awarded by the military injuries compensation board, but following an argument with a gang on the estate Quince disappears.

The emergency services can't help so Mal sets out on his own, an outsider finding his way around Greyhawk with an old white cane he's barely used before. What follows is a road-movie on a council estate, a tender but gripping journey through a labyrinth of unseen dangers, as Mal makes his way from door to door, encountering Greyhawk's oddball cast of characters.

Among these is Howard (Jack Shepherd - Wycliffe, The Golden Compass) local pub regular and voice of reason and Paula (Zoe Telford - The Thick of It, Matchpoint), a nervously talkative single mother who agrees to help Mal in his quest. Slowly, Paula opens up a different, gentler side to Mal, forcing him to confront his inner demons. Mal, in turn, helps Paula to rediscover a sense of pride and self-belief... but their friendship is about to be put to the test.

More than a film about a man and his dog, it's about the very human values of loyalty, friendship, perseverance and trust.

In preparation for his role, Alec Newman trained with Blind Veterans UK, a charity for which he has since become an ambassador. He took on his two days of training with Billy Baxter, a former Staff Sergeant in the British Army who became totally blind as a result of a virus he caught whilst exhuming bodies in Bosnia. Alec was able to observe and imitate how Billy coped with navigating unfamiliar indoor and outdoor spaces, taking a taxi journey, learning how to use a cane for the first time and learning how to use gadgets designed to help blind people prepare simple meals.

Billy Baxter said "I was very impressed with Alec's commitment to understanding what life is like for a blind veteran. I'm so pleased that Alec is now an ambassador for Blind Veterans UK, the charity that changed my life completely. They taught me how to live my life to the fullest and gave me back my independence."

BD
A stellar cast sizzles in Heat, a taut psychological drama about an obsessive detective and a brilliant thief whose fates are linked in the aftermath of a high-stakes securities heist, released on 4K UHD 8th August 2022 from ... END_OF_DOCUMENT_TOKEN_TO_BE_REPLACED
Top PicksView