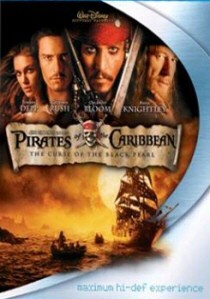 News
News Article Go back to homepage
Walt Disney Pictures' record-breaking, swashbuckling epics, Pirates of the Caribbean : The Curse of the Black Pearl and Dead Man's Chest are back - as you've never seen them before. From 21st May 2007, the films can be enjoyed as the ultimate high-definition viewing experience when they debut on Blu-ray Disc.
Sam Claflin, Kevin McNally, Ian McShane, Geoffrey Rush, Penélope Cruz, Johnny Depp
Rob Marshall
Chad Oman, Ted Elliott, John DeLuca, Jerry Bruckheimer
Walt Disney Pictures
2 hours 16 minutes
21/05/2007
Thank you for supporting DVD365.net when you order using the link(s) below. As an Amazon Associate we earn from qualifying purchases
Buy BD
Information

Walt Disney Pictures' record-breaking, swashbuckling epics, Pirates of the Caribbean : The Curse of the Black Pearl and Dead Man's Chest are back - as you've never seen them before. From 21st May 2007, the incredible cast, ground-breaking special effects and explosive extras can be enjoyed as the ultimate high-definition viewing experience when they debut on revolutionary new 2-disc Blu-ray Disc.

Now the audience can really get up close and personal to Jack Sparrow (Johnny Depp), Elizabeth Swann (Keira Knightly) and Will Turner (Orlando Bloom), with picture quality five times the sharpness of standard definition DVD. And a revolutionary advance in audio quality places viewers right in the centre of the action.

Each Pirates of the Caribbean title comes as a special 75GB 2-disc set, with premium 'O-Ring' packaging and extensive high definition bonus materials, including Java content exclusive to Blu-ray. The hugely increased capacity offers advanced interactivity with in-movie features and games to play simultaneously as you watch the main movie, seamless menus - meaning you never have to leave the film to change settings - and personal book marks for favourite scenes.

Curse of the Black Pearl comes complete with the fascinating, fully-interactive in-movie Java feature 'Scoundrels of the Sea'. Legends and lore about the pirate's lifestyle will intrigue fans as Blu-ray Disc brings you closer than ever to a life on the open waves.

And putting you at the table with a rogues gallery of characters from Dead Man's Chest, the exclusive 'Liar's Dice' game gives viewers the chance to compete with Bootstrap Bill and Davy Jones at an in-movie challenge of nerve and skill. Shot in live action, will you have what it takes to outsmart a pirate?!

Join the future of home entertainment and sail into the ultimate viewing experience, when a whole new Pirates of the Caribbean: Curse of the Black Pearl and Dead Man's Chest come onto the horizon on Disney Blu-ray Disc.

Synopsis - Pirates of the Caribbean: The Curse of the Black Pearl

In an era when pirates roamed the Caribbean seas, Governor's daughter Elizabeth Swann (Knightly) is kidnapped by evil pirate Captain Barbossa aboard most feared of all pirate ships The Black Pearl. Elizabeth's childhood friend and admirer Will Turner (Bloom) is forced to team up with rogue pirate Jack Sparrow to save her.

Little do Turner and Sparrow know what they're up against as it is slowly revealed that Barbossa and his salty crew are cursed. Forced to exist between living and dead, and only revealing their skeleton forms in the moonlight, the pirates intend to use Elizabeth's blood to break the curse and return them to the world of the living. Determined to save the love of his life Turner is prepared to do anything to thwart the dastardly pirate's plans.

Captain Jack Sparrow owes a blood debt to the legendary|Davy Jones, Ruler of the Ocean Depths, who captains the ghostly Flying|Dutchman, which no other ship can match in speed and stealth. Unless the ever-crafty Jack figures a cunning way out of this Faustian pact, he will|be cursed to an afterlife of eternal servitude and damnation in the service of Jones. This startling development interrupts the wedding plans of Will Turner and Elizabeth Swann, who once again find themselves thrust into Jack's misadventures, leading to escalating confrontations with sea monsters, very unfriendly islanders, flamboyant soothsayer Tia Dalma and even the mysterious appearance of Will's long-lost father, Bootstrap Bill.

Meanwhile, ruthless pirate hunter Lord Cutler Beckett of the East India Trading Company sets his sights on retrieving the fabled "Dead Man's Chest". According to legend, whoever possesses the Dead Man's Chest gains control of Davy Jones, and Beckett intends to use this awesome power to destroy every last Pirate of the Caribbean once and for all. For times are changing on the high seas, with businessmen and bureaucrats becoming the true pirates, and freewheeling, fun-loving buccaneers like Jack and his crew threatened with extinction.