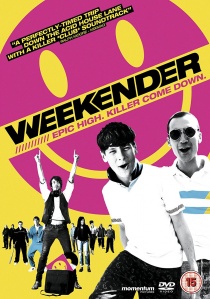 News
News Article Go back to homepage
Get ready to dust off your rave hat, clean your whistle and take a trip back in time to an era that blew the socks off the nation as Weekender comes to DVD and Blu-ray on 19th September 2011 from Momentum Pictures, following hot on the heels of the cinema release.
Richard Riddell, Emily Barclay, Sam Hazeldine, Henry Lloyd-Hughes, Zawe Ashton, Jack O'Connell
Karl Golden
Emmanuel Girod, Adam Eldrett, Ian Brady, Praveen Bhandari
Momentum Pictures
1 hour 30 minutes
19/09/2011
As an Amazon Associate we earn from qualifying purchases
Buy DVD
Buy BD
Information

Get ready to dust off your rave hat, clean your whistle and take a trip back in time to an era that blew the socks off the nation as Weekender comes to DVD and Blu-ray on 19th September 2011 from Momentum Pictures, following hot on the heels of the cinema release.

The cast is built up by an ensemble of rock-solid British actors including; Jack O'Connell (United, This is England, Harry Brown), Henry Lloyd-Hughes (The Inbetweeners, Harry Potter and the Goblet of Fire), stand-up comedian Tom Meeton (Burke and Hare), Emily Barclay (Love Birds) and Zawie Ashton (St Trinians 2: The Legend of Fritton's Gold, Blitz).

The year is 1990 and a revolution is building across the UK. Dilapidated warehouses and factories come to life at night. Euphoric teens defy police bans and cordons to embrace life and the dancefloor. Acid house has arrived and friends Matt (Lloyd-Hughes) and Dylan (O'Connell) are at the heart of it.

Tired of scamming their way to a quick buck, Matt and Dylan put together their first rave with the help of their mates and the maddest DJ on the scene, Captain Acid (Meeton). When their success catches the eye of London clubbing kingpin, Gary Mac (Stephen Wight; Ashes to Ashes, Diamond Geezer), the boys are whisked away into a VIP world of sun soaked villas dripping in girls, bin bags full of cash, dancefloor anthems, drugs and temptation.

Soon local thug John 'The Rat' Anderson (Ban Batt; The Edge of Love, Shameless) gets wind of their success and ruthlessly forces his way into the business threatening everything that Matt and Dylan have worked for. What began as celebration of music and friendship soon becomes something darker and more dangerous.

If you were a part of this bangin' era then this film will be right up your street. If you weren't. now's the time to get involved!