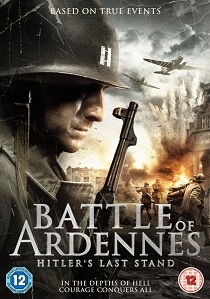 On Christmas Eve 1944, US Soldier John Myers (Craig Anthony Olejnik) and his platoon of men become trapped behind enemy lines during the Battle of the Bulge. A ferocious Nazi offensive, snow and shells rain down as The Allied troops seek refuge wherever they can, desperate to hold the front line.

When Captain Myers stumbles into a cottage on the edge of the forest, he meets Alina (Ali Liebert), a young Belgian woman who offers him shelter from the raging battle. As morning arrives, a hush spreads through the trees as the German forces agree to a brief Christmas truce and the last guns fall silent. Soon enough, Myers and Alina find themselves in love, but World War II is far from over.

As each side re-engages in battle, Myers and Alina make a pact to meet on the next Christmas Eve, little do they realise the tragedy that lies ahead.

The Battle of Ardennes: Hitler's Last Stand is released on DVD by Kaleidoscope Home Entertainment on 1st August 2016.