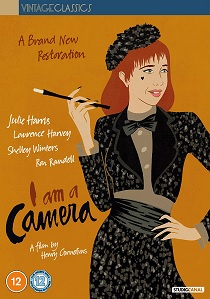 NewsComedyDrama
News Article Go back to homepage
Starring Laurence Harvey as Isherwood and Julie Harris, a brand-new restoration of the 1955 British comedy-drama film I Am a Camera is released on DVD and Blu-ray 23rd May 2022 from StudioCanal as part of the Vintage Classics collection.
Julie Harris, Laurence Harvey, Shelley Winters, Ron Randell
Henry Cornelius
James Woolf, John Woolf
Studiocanal
1 hour 33 minutes
23/05/2022
#IAmACamera #VintageClassics
Thank you for supporting DVD365.net when you order using the link(s) below. As an Amazon Associate we earn from qualifying purchases
Buy DVD
Buy BD
Information

A brand-new restoration of I Am a Camera, a 1955 British comedy-drama film based on the 1945 book The Berlin Stories by Christopher Isherwood (also the inspiration for the hit stage and film sensation Cabaret) and the 1951 eponymous play by John Van Druten. The story is based on a fictionalised account of Isherwood's time living in Berlin between the World Wars.

Directed by Henry Cornelius, from a script by John Collier, I Am a Camera stars Laurence Harvey as Isherwood and Julie Harris recreating her Tony Award-winning performance as Sally Bowles.

I Am a Camera is released on DVD and Blu-ray 23rd May 2022 from StudioCanal as part of the Vintage Classics collection.

Related Articles
The Manchurian Candidate, Darling, F For Fake: The Criterion Collection, Walk on the Wild Side, The Silent Enemy, Innocents In Paris: Vintage Classics
Passport To Pimlico
The Dark Half
Comments
BD Releases News Pick 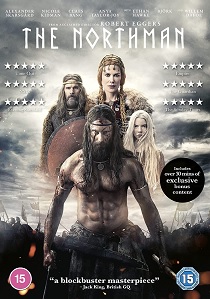