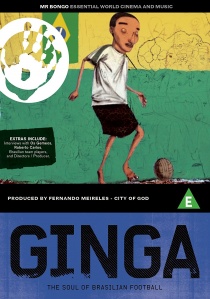 Ginga: The Soul of Brazilian Football (2005)

Pele, Zico, Jairzinho, Renaldo, Ronaldinho, Neymar... Some of world's greatest footballers all have one thing in common: they all hail from Brazil, the land of footballing legends, and this year's World Cup hosts. But what is it about the country that creates such amazing talent?

A brand new awe-inspiring documentary Ginga: The Soul of Brazilian Football explores the essence of what makes Brazil one of the greatest footballing nations ever known. Ginga is the mysterious, indefinable magical quality of rhythm and movement which sets the Brazilian game apart from all the others. Produced by Fernando Meirelles (City of God, The Constant Gardener) and directed by Marcelo Machado (Tropicalia), Hank Levine and Tocha Alves, Ginga kicks off on DVD on 12th May 2014, courtesy of Mr Bongo Films.

Ginga follows seven young footballers from a diverse range of social and ethnic backgrounds, providing an insight into the passionate culture that produces some of the world's finest footballers.

The original artwork has been created by renowned Graffiti artists Os Gêmeos (The Twins), identical twins Otavio and Gustavo Pandolfo, who started painting graffiti in 1987 and gradually became a main influence in the local scene and helped define Brazil's own style. From tags to elaborate murals their work can often be distinguished by its yellow skinned characters, with subjects ranging from family portraits to commentary on São Paulo s social and political circumstances, and Brazilian folklore.

BD
A 13-year-old girl named Meilin turns into a giant red panda whenever she gets too excited in Disney and Pixar's 25th feature film Turning Red, released on DVD, Blu-ray and 4K UHD 2nd May 2022 from Walt Disney Home ... END_OF_DOCUMENT_TOKEN_TO_BE_REPLACED
Top PicksView