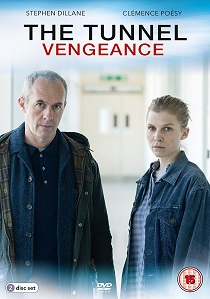 Hard-Hitting, award-winning drama The Tunnel, from the makers of Broadchurch, returns for a gripping third series The Tunnel: Vengeance. It arrives on DVD alongside The Tunnel: Series One - Three DVD Box Set courtesy of Acorn Media International, following its run on Sky Atlantic.

This emotionally-charged, critically acclaimed thriller reunites Stephen Dillane in his Emmy award-winning role as Karl Roebuck with Clémence Poésy as Elise Wassermann, in a compelling and deeply disturbing drama, that has had viewers hooked from the very beginning. The dynamic pair have faced murders, kidnapping and personal tragedies together across the channel divide, and join forces for another dark, enthralling case.

The Tunnel: Vengeance is set in a post-Brexit Europe where the English and French teams come together once more in an emotionally charged finale. When a stolen fishing boat is found adrift and on fire in the English channel, Karl and Elise believe the missing cargo consisted of trafficked migrant children. As a disenfranchised and toxic duo enact a terrifying endgame, Elise is shocked to the core by a miscarriage of justice from her past.

This thrilling six-part drama comes to DVD on 22nd January 2018 as a two-disc set complete with special features including behind the scenes; and The Tunnel Series One to Three DVD Box Set including The Tunnel, The Tunnel: Sabotage and The Tunnel: Vengeance will be released on the same date.

UHD
Get lit in the stylish ensemble caper, The Gentlemen, a star-studded, sophisticated action-comedy written and directed by Guy Ritchie, released on DVD, Blu-ray and 4K UHD 27th April 2020 from ... END_OF_DOCUMENT_TOKEN_TO_BE_REPLACED
Top PicksView