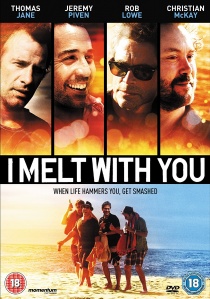 News
News Article Go back to homepage
From the producers of The Artist and JFK, when life hammers you, get smashed, is the matra of four friends on their annual reunion in I Melt With You, the dark side of a hangover, released on DVD and to Download by Momentum Pictures on 16th July 2012.
Tom Bower, Carla Gugino, Christian McKay, Rob Lowe, Jeremy Piven, Thomas Jane
Mark Pellington
Thomas Jane, Aaron L. Gilbert, Rob Cowan, Michael Cowan
Momentum Pictures
2 hours 9 minutes
16/07/2012
Thank you for supporting DVD365.net when you order using the link(s) below. As an Amazon Associate we earn from qualifying purchases
Buy DVD
Information

When life hammers you, get smashed, is the matra of four friends on their annual reunion in I Melt With You, the dark side of a hangover, released on DVD and to Download by Momentum Pictures on 16th July 2012.

Richard (Jane), Ron (Piven), Jonathan (Lowe) and Tim (McKay) are old college buddies who gather for one week each year in Big Sur to celebrate Tim's birthday and catch up on each other's lives. On the surface, they look like typical men in their forties, with careers, families and responsibilities. But as with most people, there is more to them than meets the eye.

As the week progresses, they go down the rabbit hole of excess: mountains of drugs are consumed to a blaring rock 'n' roll soundtrack, parties with much younger women spin out of control. Exhausted and run ragged, they bare their souls and their reunion takes a much darker turn. When a promise from their past is brought to light, none of their lives will ever be the same.

Best described as Entourage meets The Hangover, I Melt With You features a thunderous and amped-up punk soundtrack including The Specials, Pixies, Adam and the Ants, Sex Pistols, Dead Kennedys and The Clash.

HotDVDBDUHD
After more than thirty years of service as one of the Navy's top aviators, Pete 'Maverick' Mitchell is back where he belongs as Top Gun: Maverick flies onto DVD, Blu-ray and 4K UHD 31st October 2022 from Paramount Home Entertainment. END_OF_DOCUMENT_TOKEN_TO_BE_REPLACED
Top PicksView