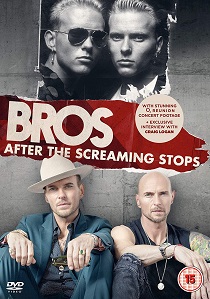 NewsSpecial InterestMusic
News Article Go back to homepage
Connected by birth, separated by industry, reunited for the gig of a lifetime. Bros: After The Screaming Stops is released on DVD and Blu-ray 12th November 2018 from Spirit Entertainment.
Matt Goss, Luke Goss
Joe Pearlman, David Soutar
Leo Pearlman
Spirit Entertainment
1 hour 37 minutes
12/11/2018
#BrosAfterTheScreamingStops
Thank you for supporting DVD365.net when you order using the link(s) below. As an Amazon Associate we earn from qualifying purchases
Buy DVD
Buy BD
Information

Connected by birth, separated by industry, reunited for the gig of a lifetime. In the 1980s, Bros were one of the biggest bands in the world - for 15 minutes.

Having sold out stadiums around the world, they were the youngest to this day to play Wembley and their 'Push' album went to Number 1 in over 20 countries, selling 10 million copies worldwide. The rise and fall of Bros was meteoric.

This film charts twins Matt and Luke Goss's reunion 28 years on, having hardly spoken and not played together since their split. With an incredibly fractured relationship and only 3 weeks to go until sell-out gigs at The O2 London, will they be able to put their history aside and come together as brothers to play the show of their lives?

A raw and emotional look into the aftermath of fame and the re-connection between two twins torn apart by their past.

Bros: After The Screaming Stops is released on DVD and Blu-ray 12th November 2018 from Spirit Entertainment.

BD
A 13-year-old girl named Meilin turns into a giant red panda whenever she gets too excited in Disney and Pixar's 25th feature film Turning Red, released on DVD, Blu-ray and 4K UHD 2nd May 2022 from Walt Disney Home ... END_OF_DOCUMENT_TOKEN_TO_BE_REPLACED
Top PicksView