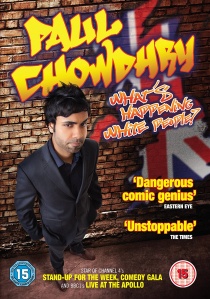 New break-through comedy sensation Paul Chowdhry's wildly humorous, insightful and daringly sharp standup routines are making 2012 a momentous year for him. After landing a coveted regular slot on Channel 4's late night topical comedy show Stand Up For The Week as well as embarking on yet another successful UK tour, 2012 continues to be his year as he releases his debut stand-up DVD, Paul Chowdhry - What's Happening White People? on 19th November 2012 by Universal Pictures (UK).

Recorded during his autumn 2012 tour at London's Hammersmith Apollo, viewers can expect a topical, edgy and unique highly charged volley of dry observational humour tapping into modern day Britain. Critically acclaimed and cited as the UK's No.1 Asian comedian with a loyal fan-base and approximately 3 million YouTube hits, Paul Chowdhry has distinguished himself as one of the most talented and popular comedians to have recently emerged into the mainstream. Inspired by legends such as the late Richard Prior, George Carlin and Sam Kinison he is one of the few comics with the ability and diversity to effortlessly straddle the urban and mainstream stand-up circuits as an international headline act.

Paul hit our TV screens recently with weekly stand-out performances on Channel 4's late night topical comedy show'Stand-Up For The Week, as well as performing on Channel 4's Comedy Gala Live At The 02 In Aid Of Great Ormond St Hospital.

This autumn Paul will take to the stage, along with some of the UK's top comics, on the ninth series of Live At The Apollo (BBC1 Nov/Dec) and will also star in the new Sky Atlantic panel show hosted by Jack Dee, Don't Sit In The Front Row.

BD
Finding praise from critics around the world, Boyhood, following the life of Mason, from early childhood to his arrival at college, is released on Blu-ray and 4K UHD 27th March 2023 from Arrow Films. END_OF_DOCUMENT_TOKEN_TO_BE_REPLACED
Top PicksView