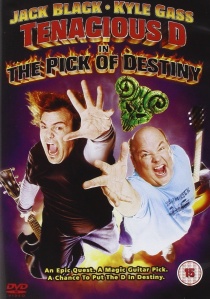 NewsMusic
News Article Go back to homepage
Boogie on down to the underworld and beyond as America's funniest melodic duo, Jack Black and Kyle Gass, rock your socks off as Tenacious D in the Pick of Destiny, released to buy DVD on 26th March 2007 courtesy of Entertainment In Video.
Troy Gentile, Paul F. Tompkins, Ronnie James Dio, JR Reed, Kyle Gass, Jack Black
Liam Lynch
Stuart Cornfeld, Richard Brener, Cale Boyter, Jack Black
Entertainment in Video
1 hour 33 minutes
26/03/2007
Thank you for supporting DVD365.net when you order using the link(s) below. As an Amazon Associate we earn from qualifying purchases
Buy DVD
Information

Boogie on down to the underworld and beyond as America's funniest melodic duo, Jack Black and Kyle Gass, rock your socks off as Tenacious D in the Pick of Destiny. The £2 million UK box office smash is released on rental DVD on 12th March 2007 courtesy of Entertainment In Video. The title will also be released to buy on 26th March 2007.

Witness the birth of Tenacious D, the self-proclaimed greatest rock band of all time! On a fateful day in Venice Beach, JB (Jack Black) and KG (Kyle Gass) meet and realise that they were destined to make history by combining their musical genius.

However, when overnight success eludes them, they set out to find the legendary "Pick of Destiny". Legend has it that this pick is actually part of the Devil's tooth, and anyone possessing it - from blues guitarist Robert Johnson to heavy metal virtuoso Eddie Van Halen - will automatically become the best guitar player in the world.

Having learned that the guitar pick is housed in a rock and roll museum, JB and KG set out to steal it for themselves. Their epic quest, which includes run-ins with the law, sorority hotties and Sasquatch, will have you begging for an encore.

HotUHD
After moving to a new town, two brothers discover that the area is a haven for vampires as the classic The Lost Boys is released on 4K UHD 20th September 2022 from Warner Home Video. END_OF_DOCUMENT_TOKEN_TO_BE_REPLACED
Top PicksView