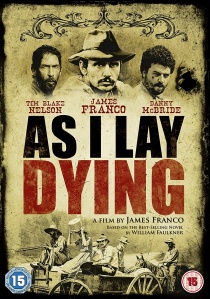 NewsDrama
News Article Go back to homepage
Adapted from the classic novel by William Faulkner, As I Lay Dying, released on DVD and Blu-ray by Lionsgate UK on 23rd June 2014, is the story of the Bundren family as they traverse the Mississippi countryside to bring the body of their deceased mother to her hometown for burial.
Brady Permenter, Logan Marshall-Green, Ahna O'Reilly, Jim Parrack, Tim Blake Nelson, James Franco
James Franco
Kirk Michael Fellows, Boaz Davidson, Lee Caplin, Caroline Aragon
Lionsgate Home Entertainment
1 hour 50 minutes
23/06/2014
#AsILayDying
Thank you for supporting DVD365.net when you order using the link(s) below. As an Amazon Associate we earn from qualifying purchases
Buy DVD
Buy BD
Information

Directed by and starring Academy Award® nominee James Franco, As I Lay Dying is a gripping Western adapted from the best-selling, classic novel by William Faulkner. Also starring Danny McBride (This is the End), Tim Blake Nelson (Oh Brother, Where Art Though?, Lincoln) and Jim Parack (True Blood) the film was part of the Official Selection at Cannes Film Festival and BFI London Film Festival 2014.

As I Lay Dying, released on DVD and Blu-ray by Lionsgate UK on 23rd June 2014, chronicles the Bundren family as they traverse the Mississippi countryside to bring the body of their deceased mother Addie to her hometown for burial. Addie's husband Anse (Tim Blake Nelson) and their children, Cash (Jim Parrack), Darl (James Franco), and three of their siblings, leave the farm with her coffin - each affected by Addie's death in a profound and different way. Their journey is disrupted by every antagonistic force of nature or man: flooded rivers, injury and accident, a raging barn fire, and not least of all -- each individual character's personal turmoil, which threaten the fabric of the family more than any outside force. 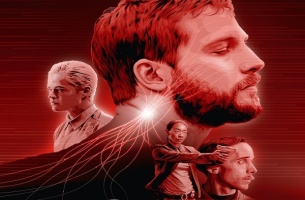 HotBD
Genre specialist Blumhouse and the visionary creator of the Saw franchise team up to create an instant cyberpunk classic as the highly anticipated enhanced release of Upgrade as a Limited Edition Blu-ray, complete with a host of brand new special features is released 18th ... END_OF_DOCUMENT_TOKEN_TO_BE_REPLACED
Comments
Hot Pick

HotUHD
StudioCanal is thrilled to announce that the iconic cult classic, Highlander, is being released to own on 4K UHD for the very first time 31st October 2022 with brand-new artwork from celebrated artist Matt Ferguson. END_OF_DOCUMENT_TOKEN_TO_BE_REPLACED
Top PicksView