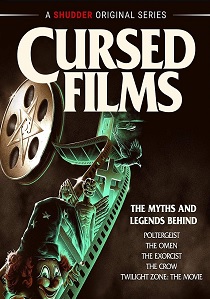 Dive into the bloody, beating heart of horror history with Cursed Films, a thrilling five-part documentary series examining the stories behind some of Hollywood's most iconic, spine-chilling cinematic masterpieces: Poltergeist, The Omen, The Exorcist, The Crow and The Twilight Zone movies.

Writer-director Jay Cheel (How to Build a Time Machine, Beauty Day) explores the power of the seminal movies that scare and ensnare and the legends that surround them. This Shudder Original is one of the streaming channel's most popular series and is now set to fascinate fans with its Blu-ray and digital release on 27th February 2023, courtesy of Acorn Media International.

The captivating series delves into the myths and legends behind some of Hollywood's notoriously "cursed" horror film productions. From the mysterious accidents that took place on the set of The Exorcist, to bombings during the making of The Omen and the rumoured use of human skeletons on the set of Poltergeist ... these stories are legendary amongst film fans and filmmakers alike. But is there truth in the tales?

Skilfully put together with a unique, nuanced take, Cursed Films gives an in-depth, enthralling insight into some of the most pivotal horror films ever made and will entrance, entertain and enrich all film fans.

HotDVDBDDIGITAL
With stunning revelations, glamorous journeys, and the arrival of the Jazz Age, Downton Abbey: A New Era, released on DVD and Blu-ray 15th August 2022 from Warner Home Video, will be the Crawleys' biggest adventure yet as they grapple with their future and new intrigue about ... END_OF_DOCUMENT_TOKEN_TO_BE_REPLACED
Top PicksView