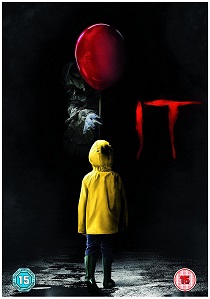 NewsHorrorThrillerBill Skarsgard
News Article Go back to homepage
Based on the Stephen King novel of the same name, when children begin to disappear in the town of Derry, Maine, a group of young kids are faced with their biggest fears in IT, released on DVD, Blu-ray and 4K UHD 15th January 2018 from Warner Home Video.
Bill Skarsgard, Jaeden Lieberher, Jeremy Ray Taylor, Sophia Lillis, Finn Wolfhard, Wyatt Oleff
Andrés Muschietti
David Katzenberg, Seth Grahame-Smith
Warner Home Video
2 hours 5 minutes
15/01/2018
#IT
Thank you for supporting DVD365.net when you order using the link(s) below. As an Amazon Associate we earn from qualifying purchases
Buy DVD
Buy BD
Buy UHD
Information

Coming soon to DVD, Blu-ray and 4K UHD from Warner Home Video, directed by Andy Muschietti (Mama) and based on the Stephen King novel of the same name, horror thriller IT, has been terrifying readers for decades.

When children begin to disappear in the town of Derry, Maine, a group of young kids are faced with their biggest fears when they square off against an evil clown named Pennywise, whose history of murder and violence dates back for centuries.