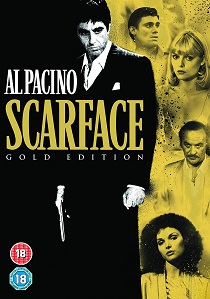 Considered one of the most influential gangster films ever made, Scarface's gritty depiction of Tony Montana's lethal ambition has made it a cultural touchstone that spans generations. Now, Universal Pictures (UK) commemorates the 1983 film's release with the Scarface Gold Edition available on 4K Ultra HD for the first time ever, newly remastered Blu-ray and DVD on 21st October 2019. The physical releases include a brand-new bonus feature, the Scarface: 35th Anniversary Reunion featuring Al Pacino and Michelle Pfeiffer to celebrate the film's iconic legacy as one of the greatest crime sagas of all time.

In the spring of 1980, the port at Mariel Harbor was opened, and thousands set sail for the United States. They came in search of the American Dream. One of them found it on the sun-washed avenues of Miami. wealth, power and passion beyond his wildest dreams. He was Tony Montana. The world will remember him by another name... Scarface.

Related Articles
Ray Donovan: Season 5, Raising Cain, Dirty Money, A Dark Truth, Blackout, Running Scared
Murder On The Orient Express, The Age Of Innocence: The Criterion Collection, Mother!, Amazon Women on the Moon, The Family, New Year's Eve, Dark Shadows, I Could Never Be Your Woman, Hairspray, Amazon Women on the Moon: Special Edition, Batman Returns, What Lies Beneath, Avengers Endgame, Maleficent: Mistress of Evil
Carrie: Limited Edition, Raising Cain, Sisters, Phantom of the Paradise, Dressed to Kill, Blow Out, Obsession, Redacted, Domino, Blow Out: The Criterion Collection
Psycho II, Independence Day: Special Edition
Limitless: Season 1, Limitless, The Abyss, The Perfect Storm
Manglehorn, Danny Collins, Dog Day Afternoon: 40th Anniversary, The Last Act, Stand Up Guys, Glengarry Glen Ross, Jack & Jill, The Son Of No One, Cruising, The Devils Advocate, The Insider, Cruising, Once Upon a Time... in Hollywood, Once Upon A Time In Hollywood, The Irishman, The Godfather Coda: The Death of Michael Corleone, American Traitor, House Of Gucci
For your consideration 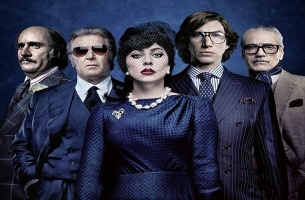 HotDVDBD
Experience the thriller influenced by the astounding real-life story of the Gucci family and their unexpected legacy in House Of Gucci, available on Blu-ray and DVD 21st February 2022 from Universal Pictures (UK). END_OF_DOCUMENT_TOKEN_TO_BE_REPLACED
Comments
DVD Releases News Pick

DVD
From the acclaimed director of fan-favourites such as Baby Driver, Shaun of the Dead and The World's End comes the tribute to 1960s London in Last Night In Soho, available to own on DVD, Blu-ray and 4K UHD 31st January 2022 ... END_OF_DOCUMENT_TOKEN_TO_BE_REPLACED
Top PicksView