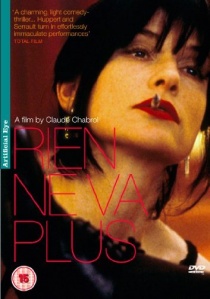 Directed by Claude Chabrol and starring Isabelle Huppert and Michael Serrault, Rien Ne Va Plus is released on DVD by Artificial Eye on 24th September 2012.

The 50th film from legendary French New Wave writer and director Claude Chabrol is a typically Hitchcockian comic thriller about a pair of con artists embroiled in a dizzying array of double-crosses. Up until now, Betty (Isabelle Huppert) and Victor (Michel Serrault) have contented themselves with scamming small fry hotel conventions. The ever flirtatious Betty however has bigger plans. One in particular involves a briefcase containing five million Swiss francs of syndicate money.

Before long Victor becomes suspicious of Betty's solo pursuits. Is his once-loyal partner betraying him? And what of Maurice, the owner of the briefcase and his gangster bosses? Chabrol directs this sleek, shadowy caper with wit and masterful restraint.

HotDVDTV
Featuring every episode of the entire series in an 8-disc box set, the hilarious BBC comedy Keeping Up Appearances is released on DVD 28th November 2022 ... END_OF_DOCUMENT_TOKEN_TO_BE_REPLACED
Top PicksView