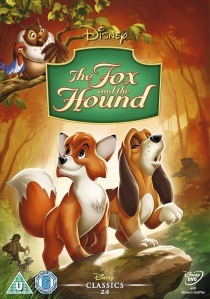 Celebrating 25 years of firm friendship, Disney's classic The Fox and The Hound has been digitally remastered on Disney DVD for a brand new audience to enjoy. This extra-special 25th Anniversary edition is packed with a delightful selection of new bonus features, it will win the hearts of young and old everywhere.

The Fox and The Hound tells the story of a young hound puppy Copper and his fox friend Tod (voiced by Hollywood favourite Kurt Russell). Their unlikely friendship is tested when the two close friends realise the traditional conflict between fox and hound should make them enemies rather than pals. With timeless appeal, one of Disney's most endearing animations is a true testament to the amazing power of friendship, love, courage and respect.

This 25th Anniversary Special Edition comes with exciting new bonus features to enjoy. The Making of the Fox and the Hound featurette takes a fascinating behind the scenes trip with classic Disney animators at a time of exciting transition for the studio. There is also a second great story in the DVD storybook New Best Friends and kids will love the interactive Forest Friendship game. With sneak peeks, cast interviews and much more, families everywhere will love The Fox and The Hound when it comes to Disney DVD from 26th February 2007.

The Fox and The Hound 2, also released on the 26th February 2007, reunites the two furry friends in an all-new tale, giving fans of Tod and Copper the opportunity to continue enjoying their exciting adventures. Featuring the voice talents of Patrick Swayze and music star Reba McEntire, this follow up to the original sees Copper and Tod's friendship once again in turmoil as Copper finally gets a shot at the big time with a starring role in a hound dog chorus. When the attractive Dixie, arrives on the scene, there is also the excitement of first love for one of the duo. This comedy adventure, with its rousing soundtrack, is sure to have a brand new generation of fans howling with delight.

The Fox and The Hound Synopsis

When a lonely widow adopts a mischievous cub named Tod, he soon forms a firm bond with the adorable hound puppy Copper. The two quickly become inseparable, spending their days playing together in the forest. But as they grow older they can't escape the fact that by the very nature of what they are, they should be mortal enemies. When Copper's owner, Amos Slade, decides that Tod must be caught and killed, it puts their friendship to the ultimate test. Find out if the friendship of Tod and Copper can survive in this classic story that has stood the test of time!

DVDBDUHD
09/08/2021
The world's most lethal odd couple - bodyguard Michael Bryce and hitman Darius Kincaid - are back on another life-threatening mission as The Hitman's Wife's Bodyguard arrives on DVD, Blu-ray and 4K ...