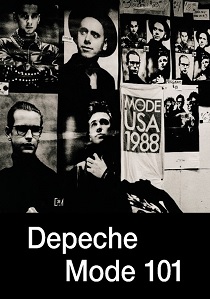 Directed by DA Pennebaker, Chris Hegedus, and David Dawkins, Depeche Mode 101 recounts the iconic final concert of the 'Music for the Masses' world tour in Pasadena, and follows the fans travelling to California on a bus after winning a competition to attend the concert.

Meticulously remastered in exclusive high definition 4K, the ground-breaking release will include the final tour performance at the Rose Bowl Stadium. Depeche Mode 101 is available to Download and keep on 14 December 2021 from Sony Pictures Home Entertainment.

Depeche Mode prepares for the 101st and final concert of its massive Music For The Masses world tour at the Rose Bowl Stadium, Pasadena, California, while a group of fans who won a contest travel to the concert through the United States on a bus.

This groundbreaking film, that set the standard for music documentaries, has been meticulously remastered from the original sources in a brand-new exclusive high-definition 4K digital release - this release will include the final tour performance at the Rose Bowl.