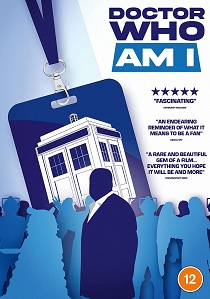 NewsSpecial InterestDocumentary
News Article Go back to homepage
An infamous Doctor Who screenwriter is reluctantly dragged back into the American Whoniverse in Doctor Who Am I is released on DVD and Blu-ray 28th November 2022 from Kaleidoscope Home Entertainment.
Matthew Jacobs, Paul McGann, Eric Roberts, Daphne Ashbrook
Vanessa Yuille, Matthew Jacobs
Matthew Jacobs, Vanessa Yuille
Kaleidoscope Home Entertainment
1 hour 20 minutes
28/11/2022
#DoctorWhoAmI
Thank you for supporting DVD365.net when you order using the link(s) below. As an Amazon Associate we earn from qualifying purchases
Buy DVD
Buy BD
Information

In 1996, a Doctor Who TV movie starring Paul McGann as the Eighth Doctor, was envisioned to launch the franchise into an exciting new chapter.

But whilst the film found success in the UK, attempts to freshen up established lore resulted in a decidedly frosty reception from transatlantic audiences. Now, a quarter of a century later, screenwriter Matthew Jacobs prepares to venture back into the legendary sci-fi universe, to reassess his relationship with the franchise and the American fandom who vilified him.

Featuring original cast of the controversial movie, including Paul McGann (The Three Musketeers, Queen of the Damned), Eric Roberts (Inherent Vice, The Dark Knight, The Expendables), and Daphne Ashbrook (Star Trek: Deep Space Nine), this funny and emotionally perilous documentary not only revisits a pivotal moment in Doctor Who history, but highlights the unity and creative freedom within the fandom, as Jacobs ultimately, and unexpectedly, finds himself a kindred part of this close-knit, yet vast, family of fans.

Doctor Who Am I is released on DVD and Blu-ray 28th November 2022 from Kaleidoscope Home Entertainment.