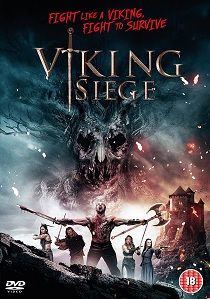 During a wild night of debauchery, a gang of vengeful women plot to massacre a monastery full of corrupt monks who sold their loved ones as slaves. Their plan comes unstuck when a gang of marauding Vikings arrive with an army of vicious, tree-like demons on their tail. Trapped in the monastery, the feuding factions must band together and try to stay alive until dawn when salvation will arrive.

Filled with foul-mouthed monks, brutish warriors on the rampage and a terrifying horde of growling, gruesome half-man half-tree mutants, Viking Siege is no ordinary fantasy adventure film - but a slam bang homage to 1980s sword and sorcery films with a dash of Assault on Precinct 13 and Evil Dead thrown in, as the group are trapped in a monastery at the with merciless monsters prowling outside.

With a powerful lead performance from Michelle McTernan (Stella) as Atheled, the leader of the formidable females, James Groom as the enigmatic Lord Osmond, it also features an hilarious comic turn by Alastair Kirton (who also co-wrote the script), star of the cult low-budget zombie Colin.

A must for fans of TV shows Vikings, Black Sails and Game of Thrones, and fantasy classics like Conan The Barbarian and Krull, Viking Siege, released on DVD 26th Decemeber 2017 from Altitude Film Entertainment, will have you rooting for Atheled and her warrior women as they find themselves, in a fantastic effects-packed finale, pitted against some of the nastiest, gnarliest foes this side of the White Walkers.

DVD
Two lifelong friends find themselves at an impasse when one abruptly ends their relationship, with alarming consequences for both of them in The Banshees Of Inisherin, released on DVD and Blu-ray 30th January 2023 from Walt ... END_OF_DOCUMENT_TOKEN_TO_BE_REPLACED
Top PicksView