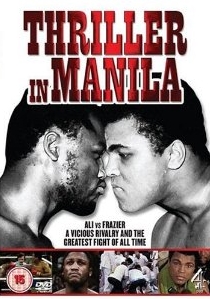 A powerful new feature-length documentary, Thriller in Manila tells the story of the bitter and intense rivalry surrounding what is now considered the greatest ever boxing match in history, released exclusively by 4DVD on 17th November 2008.

This compelling documentary charts the vicious feud, entwined with the racial politics of 1970s America, which formed between Muhammad Ali and Joe Frazier; culminating in their most-famous fight in 1975 in the Philippines -- the third and final confrontation between two friends-turned-bitter rivals.

After being stripped of his heavyweight title and license to box for refusing to fight in the Vietnam War, Ali was held in contempt by the boxing establishment and many of his fans. However Frazier, who took the heavyweight crown, stood by him respecting his courageous religious beliefs and even petitioned Washington to reinstate his license.

In 1971, after three and a half years in the wilderness, Ali got his license back but dramatically turned on his one time friend and ally Joe Frazier. The two men were caught in the battle for the soul of black America. Becoming the mouthpiece for the religious group Nation of Islam, Ali portrayed Frazier as a traitor to the black community, an insult which cut to the core of his being.

By the time of the third fight in Manila, the relationship was at boiling point and their extraordinary personal battle led to a fight that was a near-death experience for both of them.

With exclusive interviews from Joe Frazier, Frazier's son, boxing experts and team members from both fighter's camps, along with incredible archive footage and music of the time Thriller In Manila is the definitive account of this iconic event.

DVD
An intimate and moving story of childhood memories, Belfast is available to own on Blu-ray and DVD 25th April 2022 from Universal Pictures (UK). END_OF_DOCUMENT_TOKEN_TO_BE_REPLACED
Top PicksView