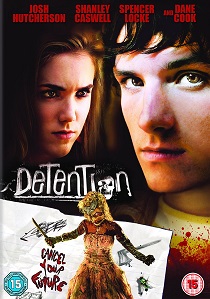 In this comedy-horror hybrid, a group of high school seniors must prevent themselves from becoming the victims of a slasher-movie villain terrorizing their small town of Grizzly Lake. Along the way, they encounter body-switching, time-travel and even a human-insect hybrid. The film also stars Spencer Locke (TV's Cougar Town) and Shanley Caswell (Upcoming The Warren Files) and features music by The Kills, Pussycat Dolls, 50 Cent, Hole, C&C Music Factory and Public Enemy.

The DVD is packed with bonus materials, including a feature-length featurette. "Cheat Mode: The Unbelievably Mind Melting Making of Detention" provides detailed insights from cast and crew on the making of the film, as well as trivia throughout.

Josh Hutcherson, Dane Cook and Spencer Locke star in Detention, a hipster, teen horror-comedy, in which the students of Grizzly Lake must survive their final year of high school. Standing in their way is Cinderhella, a slasher-movie killer who has seemingly come to life and is preying on the school's student body. As the clock ticks and the bodies pile up, the likely suspects are embroiled in a race against time to stop Cinderhella and ultimately save the world ... if only they can get out of detention.

Detention was directed by Joseph Kahn and written by Kahn and Mark Palermo. It was produced by MaryAnn Tanedo and Richard Weager, with Bob Abramoff, Josh Hutcherson, David Kang, Clayton Reaser and Vernon Reaser serving as executive producers.