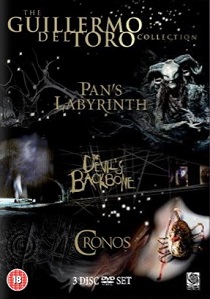 Visionary director Guillermo del Toro (Hellboy, Blade II) brings his compelling and beautiful vision to the screen in the Guillermo Del Toro Box-set, released by Optimum Home Entertainment on 12th March 2007, and features three of his most accomplished films.

Alongside his auspicious debut with Cronos, the boxset includes huge recent success Pan's Labyrinth and its perfect companion piece the haunting The Devil's Backbone. The boxset includes a 16 page booklet including storyboards and an essay by Jason Wood.

Set during the end of the Spanish Civil War, Pan's Labyrinth tells the story of Ofelia (Ivana Baquero, Fragile) whose mother has recently remarried. Ofelia and her heavily pregnant mother move to the country and into the house of the new husband, coldly authoritarian Vidal (Sergi Lopez, Dirty Pretty Things), a captain in Franco's army.

Finding her new life hard to bear, the young girl seeks refuge in a mysterious labyrinth she discovers next to the sprawling family house. Pan, the guardian, a magical creature, reveals that she is none other than the long lost princess of a magical kingdom. To discover the truth, Ofelia will have to accomplish three dangerous tasks, as well as risking incurring the wrath of her dangerously volatile stepfather. The film also stars Mirabel Verdú (Y Tu Mamá También) and Doug Jones (Hellboy) and is co-produced by Alfonso Cuaron (director of Y Tu Mamá También and Harry Potter and the Prisoner of Azkaban).

Set during the last days of the Spanish Civil War, the film revolves around an orphanage where a group of children are faced not only with the horrors of the conflict that surrounds them but are also haunted by the spectre of Santi - a murdered student who roams the orphanage.

With the help of the spirit, the orphans endeavour to discover the background to the murder, the truth unfolding in a richly orchestrated drama before they seek vengeance in an explosive finale. Supernatural melodrama, strange and unpredictable ghost story The Devil's Backbone is also a bloody fable of initiation in the form of a gothic story, and the story of how a few moments of pain can remain suspended in time.

A sixteenth century Alchemist creates a mystical golden scarab, which imbues its owner with the power of eternal life but also a vampire's thirst for blood. The scarab remains buried for centuries until an antiques dealer Jesus Gris (Federico Luppi) unearths the mechanism concealed inside a statue.

However, what Jesus doesn't know is that a dying old industrialist Dieter de la Guardia (Claudio Brook) is obsessed with the pursuit of this device to prolong his life, and with the help of his nephew Angel (Ron Perlman, Hellboy), he will do anything to get his hands on it.

Cronos was Del Toro's remarkable debut feature film and spins a unique tale of vampirism, immortality and family tragedy, featuring many of the visual motifs that would resurface in his later work. Del Toro spent some 8 years developing the script until he managed to raise the funding to shoot it in his native Mexico.