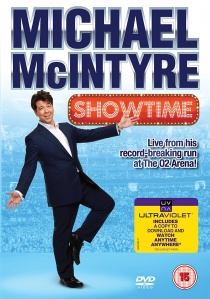 The maestro of the big arena stage is back with his funniest show yet! Michael McIntyre returns in his brand new stand-up released on 12th November 2012 on DVD and Blu-Ray with Ultraviolet and Digital Download from Universal Pictures (UK). Three years in the making, and featuring all new material from his gigantic 71 date sell-out 2012 live arena tour; Michael McIntyre - Showtime! includes soon-to-be classic routines from the UK's number one comedian, and is set to emulate the huge record-breaking successes of his previous million selling chart topping DVD releases.

His latest hilarious show touches on subjects such as family life, modern travails, and all those everyday things you never knew were so absurd. Michael McIntyre - Showtime! is a must-have addition to the McIntyre comedy DVD collection and is also the perfect gift for any comedy fans of any age. Michael is also now a Christmas TV favourite with his top rating primetime seasonal show on BBC1. So crack open the man-drawer, take a front row seat with the whole family in the comfort of your own home and watch the comedy master at work exclusively this festive season. There is only one gift worth giving this Christmas. It's Showtime!

Michael's autumn 2012 show will be one of the biggest comedy arena tours of all time. The extensive UK and Ireland arena tour includes a massive sold-out 10 night residency at London's O2 Arena, matching pop star Rihanna's record-breaking feat in 2011.

Michael's first two DVD releases, Michael McIntyre Live & Laughing (2008) and Hello Wembley! (2009) smashed existing stand-up DVD sales during their first weeks on sale. In 2009, Hello Wembley! stormed the DVD charts to become the biggest selling stand-up DVD of all time. Within five weeks it had sold over a million copies and became the best-selling DVD for Christmas, becoming the no.1 stand-up DVD of 2009. Michael's debut DVD Michael McIntyre Live and Laughing still holds the top spot as the fastest selling UK debut standup DVD of all time. In 2008 it reached number one in the comedy DVD charts during the very first week it was released, and went on to become the second best-selling stand-up DVD that year.