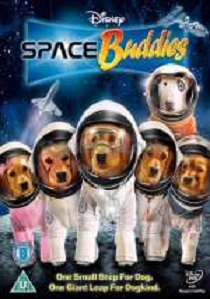 After taking US audiences by storm with their canine capers, the galaxy's favourite talking puppies return in an all-new movie, Space Buddies, launching on Disney Blu-ray and DVD from 16th March 2009. Adorable Golden Retriever puppies Rosebud, Buddha, Budderball, B-Dawg, and Mudbud have won the hearts of millions across the Atlantic and are set to do the same here in the UK in their third epic adventure which takes them farther than they ever dreamed.

Overflowing with intergalactic action, Space Buddies is an inspiring tale of teamwork, loyalty and friendship. It's Buddy-loving fun the whole family will enjoy again and again. Packed with more heart, more suspense and more tail-wagging fun than ever before, the Buddies' greatest adventure yet takes them to the final frontier - outer space! The Buddies' new escapade sees them travel to the moon in search of a dream, only to realize that what they want is back on earth. Moving at warp speed, dodging asteroids and more, the Buddies and their two new friends, Spudnick, a sweet bull terrier, and Gravity, a resourceful ferret, must summon their courage and ingenuity to launch plans for a moon landing and a rocketing trip back home.

Space Buddies is packed with out-of-this-world bonus features including hilarious outtakes, blunders, bloopers and fun facts. 'DisneyPedia: The Buddies Guide to Space Travel' is a must for all Buddy lovers, taking them up close and personal to the pups as they speak from the set about some of their favourite movie-making moments. Also included in a music video of 'Dancing in the Moonlight' performed by rising Disney Channel star Alyson Stoner.