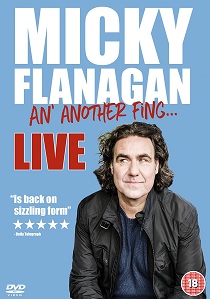 NewsStandup Comedy
News Article Go back to homepage
Recorded live at the O2, you will laugh until you cry when Micky Flanagan - An' Another Fing... Live is released on DVD and Blu-ray 20th November 2017 from Spirit Entertainment Limited.
Micky Flanagan
Brian Klein
Spirit Entertainment Limited
1 hour 20 minutes
20/11/2017
#MickyFlanagan #AnAnotherFing
Thank you for supporting DVD365.net when you order using the link(s) below. As an Amazon Associate we earn from qualifying purchases
Buy DVD
Buy BD
Information

Micky's sell-out An' Another Fing tour is the biggest comedy event of 2017 playing to over 600,000 people across the UK and breaking box office records up and down the country. Recorded live at the O2, join Micky as he updates us in his own hilarious style on where he is at following an enjoyable gap year.

As The Telegraph 5* review states, "Britain's best-paid comedian is worth every penny". Experience the master of comedy at the top of his game as he explores subjects including money, the French, his relationship with his new dog, marriage and much, much more all performed in Micky's typical 'man of the people' cockney-charm style.

You will laugh until you cry when Micky Flanagan - An' Another Fing... Live is released on DVD and Blu-ray 20th November 2017 from Spirit Entertainment Limited.

HotDVDBD3D-BDUHD
An ancient evil is unleashed after centuries of captivity and her lust for revenge threatens to destroy the world in The Mummy, a spectacular saga coming to 4K Ultra HD, 3D Blu-ray, Blu-ray, DVD and On Demand on 23rd October 2017 from Universal Pictures (UK). END_OF_DOCUMENT_TOKEN_TO_BE_REPLACED
Top PicksView