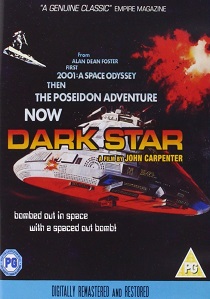 John Carpenter's pulp science fiction classic - this brilliantly clever and funny parody of Stanley Kubrick's 2001: A Space Odyssey, follows a warped intergalactic mission to blow up unstable planets. Four bored astronauts fill in time between missions catching up on their tans with the help of a sunlamp, playing with a suspiciously plastic-looking alien mascot they are taking back to Earth and conversing with their female version of Hal. Things start to go horribly wrong as the spaceship computer misfires and a surfer makes it back to Earth Surfing on an improvised board.

Dark Star was intended to be a 68 minute student film. Hollywood Producer Jack Harris managed to convince the film-makers to shoot 15 minutes of extra footage and released the expanded version theatrically.

This all new Blu-ray edition has been sourced from an original 16 x 9 35mm theatrical print. The film was originally shot on 16mm, and then blown up to 35mm for theatrical distribution. The new master has been subject to a new grade and extensive manual frame by frame digital restoration with enhance and restored to Dolby Digital 5.1

BD
After more than thirty years of service as one of the Navy's top aviators, Pete 'Maverick' Mitchell is back where he belongs as Top Gun: Maverick flies onto DVD, Blu-ray and 4K UHD 31st October 2022 from Paramount Home ... END_OF_DOCUMENT_TOKEN_TO_BE_REPLACED
Top PicksView