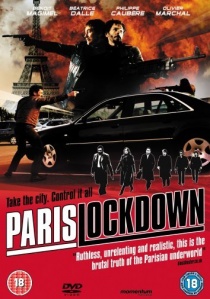 Produced by Eric Névé (Dobermann) and directed by Frederic Schoendoerffer (director of the Monica Bellucci and Vincent Cassell thriller, Spy Bound), Paris Lockdown, released on DVD by Momentum Pictures on 23rd June 2008, is one of the most graphically violent, sexually explicit and all-round shocking movies to come out of France since Virginie Despentes' Baise-moi and Gaspar Noé's Irréversible.

An intensely powerful thriller set in the dog-eat-dog criminal underworld of Paris (a world akin to that portrayed in the US TV series The Sopranos), the film stars Benoit Magimel (Intimate Enemies; The Nest; The Piano Teacher), Beatrice Dalle (Clean; Betty Blue), Olivier Marchal and Philippe Caubere (Tell No One) in a blood-drenched story of an aging mob boss whose empire is at risk of collapsing around him.

Hidden within the shadows of the City of Light is another world, one where gangsters, prostitutes, drug dealers and murderers live according to the laws of Claude Corti, a powerful and menacing crime lord with little patience or sympathy for those who refuse to live by his rules. It's a world where money is everything and for those devoted to Corti the rewards are plentiful. Fast cars, first class drugs and expensive women are there for the taking.

Disrespect and disobedience inevitably invoke punishment, more often that not in the form of torture and, eventually, painful death. Two commodities that power and money cannot buy, however, are loyalty and trust, as Corti soon discovers when he is busted and imprisoned for possession of counterfeit vehicle registration forms. With Corti temporarily out of the picture, his associates are forced to decide whether to run his illicit business on his behalf or to assume his position themselves. The result is an incendiary situation that only needs the smallest spark to ignite a devastating crime spree that can only send Paris into total lockdown.