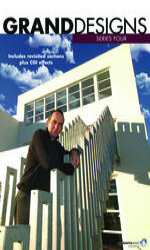 NewsTV Series
News Article Go back to homepage
Property shows have come and gone but one constant with us since 1999 and stronger and bigger than ever is the elite home design Channel 4 television show Grand Designs. Now the fourth series comes to DVD on 5th May 2008 courtesy of Fremantle Home Entertainment.
Kevin McCloud
Max Baring, Claire Lasko, Lucy Brown, Ned Williams
Fiona Caldwell, Ed Stobart, Toni Gray, John Silver
Fremantle Home Entertainment
Unknown
05/05/2008
Thank you for supporting DVD365.net when you order using the link(s) below. As an Amazon Associate we earn from qualifying purchases
Buy DVD
Information

Property shows have come and gone but one constant with us since 1999 and stronger and bigger than ever is the elite home design Channel 4 television show Grand Designs. Now the fourth series comes to DVD on 5th May 2008 courtesy of Fremantle Home Entertainment, just in time for the Grand Designs Live show at the Excel centre in London from 3rd through to 11th May.

Whist other TV property shows have come and eventually sunk under the weight of passing fads and a pile of ill-advised MDF trimmings, Grand Designs has set the standards for design excellence as members of the public set their sights to stratospheric highs to attempt to pull off dream projects that look ambitious beyond anything realistically achievable. As Kevin follows each journey into the self-build unknown offering an unparalleled insight into how elaborate and complicated design concepts work in practice, each episode often turns into a personal and moving voyage of endurance and self-discovery that is eventually mirrored in houses that surprise and delight.

In series four of, "The only worthwhile property related programme on television" (The Times), design expert Kevin McCloud tells the stories of seven ambitious design projects and the people who built them. Amongst the blue-prints, he meets a couple who set up their own architectural practice to realise their goal and meets a music manager who wants to build a Modernist Bauhaus inspired white cube in the middle of a sleepy seaside town. Grand Designs – Series 4 (cert. E) will be released on DVD by Fremantle Home Entertainment on 5th May 2008.

Fans of the show will not want to miss Grand Designs - Live: The UK's No.1 Consumer Show for Design and Innovation, now in its seventh year. Running from 3rd May through to 11th May at the Excel Centre in London and based on the hugely successful Channel 4 TV series, presented by design expert Kevin McCloud, the live show will inspire you with the latest design ideas for your home. Packed full of new show features, celebrity experts and great advice, you will see ideas from every home ever featured in the TV show. Explore new room sets and a wider range of innovative designs; see the widest selection of kitchens and bathrooms in the UK; meet designers from the best Grand Designs episodes and learn all about creating an eco home.