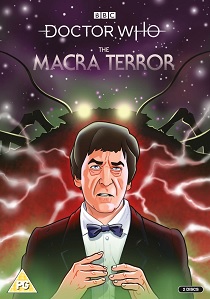 The original 1967 master recordings of 'The Macra Terror' were lost soon after the programme's original transmission. However, audio-only recordings have survived and have been used here to create a brand new fully animated reconstruction of this lost classic.

The Doctor (Patrick Troughton) and his companions (Jamie, Polly and Ben) arrive on a human colony in the far flung future. The colony outwardly appears to be happy and carefree. But behind its cheerful exterior, the colony has been secretly infiltrated by a race of giant parasitic creatures called Macra.

The Macra brainwash the human colonists to mine toxic gas in the levels below the colony. Ruling the settlement from a control centre in the heart of the main city, they scuttle around at night looking for food.

The Doctor's friend Ben is soon taken over by the Macra and under their malign influence, he turns against the Doctor. As their influence spreads, the Doctor sets out to bring an end to the Macra terror.

With over four hours of bonus content, Doctor Who: The Macra Terror is released on DVD and Blu-ray 25th March 2019 from BBC Worldwide.

HotDVDBDUHD
From the acclaimed director of fan-favourites such as Baby Driver, Shaun of the Dead and The World's End comes the tribute to 1960s London in Last Night In Soho, available to own on DVD, Blu-ray and 4K UHD 31st January 2022 from Universal Pictures (UK). END_OF_DOCUMENT_TOKEN_TO_BE_REPLACED
Top PicksView