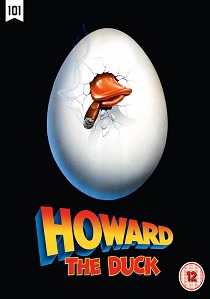 From executive producer George Lucas and the pages of Marvel Comics comes a comedy adventure spectacular about a fast-talking, cigar-chomping, beer-loving duck from a parallel universe who crashes to Earth and somehow winds up in Cleveland. As Howard attempts to return to his own planet, he falls in love with rock singer Beverly Switzler (Lea Thompson, Back to the Future) and must battle an evil invader known as the Dark Overlord.

Extras include a new 20-minute featurette in which the BFI's Vic Pratt discusses Howard's comic book origins and the character's journey to the big screen, plus two brand new commentaries.