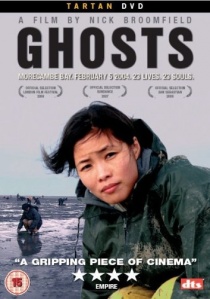 NewsDrama
News Article Go back to homepage
Director Nick Broomfield has made his formidable reputation as a documentary filmmaker. In Ghosts, released by Tartan Video on 9th April 2007, he dramatises events with his expert eye for realism and a powerful sense of anger and justice.
Ai Qin Lin, Man Qin Wei, Zhe Wei, Zhan Yu, Yong Aing Zhai
Nick Broomfield
Nick Broomfield, Jez Lewis
Tartan
1 hour 36 minutes
09/04/2007
Thank you for supporting DVD365.net when you order using the link(s) below. As an Amazon Associate we earn from qualifying purchases
Buy DVD
Information

In 2004, the tragic death of a group of Chinese cockle-pickers grabbed headline news internationally. Whilst they were illegal migrants, they were also victims of a system that exploits people desperate for a seemingly better life in Britain. Willing to sacrifice everything for her son's welfare, Ai Qin Lin pays to be illegally smuggled out of China into Britain in the hope of a better life. However, the reality is far different. She's forced to accept low-paid jobs and overcrowded living conditions, but also enduring abuse and bullying. After hard labour on farms and in factories and fields, better prospects beckon on the beaches of Morecambe Bay.

Director Nick Broomfield has made his formidable reputation as a documentary filmmaker, chooing a wide range of subjects and personalities such as Kurt And Courtney and Biggie And Tupac.

In Ghosts, released by Tartan Video on 9th April 2007, he dramatises events with his expert eye for realism and a powerful sense of anger and justice, focuses on one young single mother, Ai Qin Lin, whose harrowing personal experiences have helped shape the story, giving added passion and authenticity. She is one of the lucky ones, but she is just one example of the ruthless emergence of a modern-day slave trade at a time when the two hundredth anniversary of the Slave Trade is being acknowledged.

The film provides a voice to this invisible but growing aspect of immigrant population, a world which is easier to ignore than acknowledge. Ghosts adds a powerful voice to an emerging area of cinema which borders documentary and drama, choosing subjects that often have a political and social relevance. Classic films such as The Battle of Algiers create an immediacy to its account of the Algerian struggle for independence but the last few years has seen movies such as Touching The Void, Road To Guantanamo, Dirty Pretty Thing, Maria Full Of Grace and United 93.

Broomfield's sense of urgency is compounded with his documentary-style techniques such as hand-held camera, natural lighting, and authentic locations. Equally he has a cast on non-professional actors too, prominently former illegal immigrants, adding to a chilling sense of re-enactment. Never was a film more relevant to the current political and social climate in Britain. Ghosts is a truly haunting and sobering experience.

Related Articles
Whitney: Can I Be Me
Comments
DVD Releases News Pick