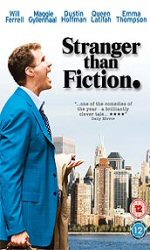 Harold Crick is an ordinary man, but all that is about to change. An inventive and heartfelt comedy drama from acclaimed director Marc Forster (Finding Neverland, Monster's Ball), Stranger than Fiction is available to buy and rent on DVD from 2nd April 2007, courtesy of Sony Pictures Home Entertainment.

Karen Eiffel (Thompson) is an author writing her latest novel about an isolated man named Harold Crick. Little does she know that her fictionalised character is real. Taxman Harold Crick (Ferrell) leads a dull existence, regulated to the minute by his wrist watch. His well-ordered world is turned upside down, however, when he begins to hear a woman's voice narrating everything he does and thinks. Enlisting the help of eccentric literary professor Jules Hilbert (Hoffman), Harold struggles to come to terms with the idea that he is in fact a character in an as yet unfinished novel.

With Hilbert's help, Harold finally starts to enjoy his life, even beginning a relationship with his IRS client, a government-hating bakery owner named Ana (Gyllenhaal). Meanwhile, Karen is struggling to overcome writer's block and finish her story. Only one question remains: how to kill Harold Crick?

UHD
Based on the global blockbuster videogame franchise from Sega, Sonic The Hedgehog, released on DVD, Blu-ray and 4K UHD from 8th June 2020 from Paramount Home Entertainment, tells the story of the ... END_OF_DOCUMENT_TOKEN_TO_BE_REPLACED
Top PicksView