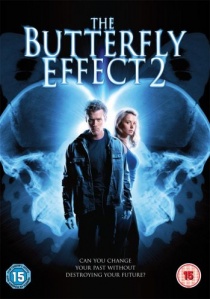 Icon Home Entertainment announces the DVD release of the gripping supernatural thriller The Butterfly Effect 2 on the 23rd April 2007. The thematic sequel to the 2004 hit The Butterfly Effect starring Ashton Kutcher, delves even deeper into the turbulent nature of the past, present and the future.

We all wonder what it would be like to change the present by altering the past; to have the power to right a wrong or to save somebody's life. The Butterfly Effect 2 delves further into the disturbing and often life-threatening effects that this kind of power can have, whether in the wrong or right hands.

The Butterfly Effect 2 builds on the premise set by its predecessor as Nick Larson (Eric Lively) leaps back in time to save his loving girlfriend Julie (Erica Durance) from her untimely death. The changes he makes have dire consequences in the present and his efforts to right the wrongs of the past play out disastrously. Like The Butterfly Effect, the sequel is a rollercoaster ride of chills and thrills and will keep you gripped to the end