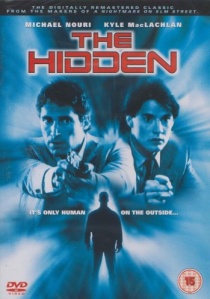 Winner of a Grand Prize at the Avoriaz Fantastic Film Festival, the gruesome sci-fi horror The Hidden is unleashed by Entertainment in Video to buy on DVD from 8th October 2007.

Starring Kyle MacLachlan (Showgirls, Twin Peaks) as FBI agent Lloyd Gallagher, The Hidden follows the hell-raising rampage of a creature from outer space, intent on robbery, rock music and murder. Inhabiting human bodies as hosts, The Hidden can only be uncovered by another.

Directed by Jack Sholder (A Nightmare on Elm Street Part 2, }Freddies Revenge) and starring Michael Nouri (Flashdance, The OC), The Hidden finds regular Los Angeles cop Tom Beck (Michael Nouri) pursuing a seemingly average guy who has snapped and turned into a homicidal maniac and what lies hidden only emerges when FBI agent Lloyd Gallagher shows up to help the investigation.

Following a trail of dead bodies and mayhem, Beck's maniac turns out to be a murderous alien that swaps identities and evades detection by inhabiting human bodies. Beck's best hope is FBI agent Lloyd Gallagher - the alien sent to Earth to bring it back - but first they've got to catch The Hidden...

Related Articles
Twin Peaks: A Limited Event Series, Twin Peaks: The Entire Mystery, Portlandia: Season 1 And 2, Twin Peaks: Season 2, Sex and the City: Season Three, Showgirls, The House With a Clock in its Walls, Dune, Twin Peaks: Fire Walk With Me
Babylon 5: Season 1
The Killers
Flashdance
For your consideration 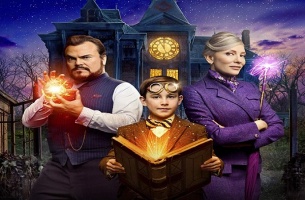 The House With a Clock in its Walls

HotDVDBDUHD
Enjoy the delightfully thrilling tale of a mysterious house where things, including the inhabitants, are not what they seem to be as The House With a Clock in its Walls arrives on 4K Ultra HD, Blu-ray and DVD 28th January 2019 from Entertainment One. END_OF_DOCUMENT_TOKEN_TO_BE_REPLACED
Comments
Hot Pick

HotBDUHD
Sweeping the 60th Academy Awards and winning nine Oscars including Best Picture and Best Director, The Last Emperor arrives on Blu-ray and 4K UHD 13th February 2023 from Arrow Films in a brand new 4K restoration that will take your breath away. END_OF_DOCUMENT_TOKEN_TO_BE_REPLACED
Top PicksView